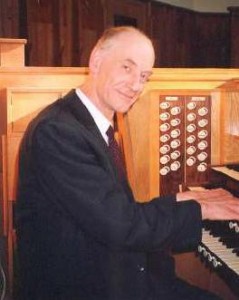 David Gammie read Classics at Oxford, but studied the organ with HA Bate and Peter Hurford. He regularly gives recitals in London and elsewhere, including Westminster Cathedral, St Paul’s Cathedral and Westminster Abbey. David was organist and choirmaster for many years at his family church, St Andrews URC Cheam. He was appointed organist and assistant director of music at the Sacred Heart in 2001, just after making a recording there for the Organ Club’s 75th anniversary CD. As well as playing, David writes programme notes for many of the major organ venues, including the Westminster Cathedral Grand Organ series and the St Albans Organ Festival, as well as many CD sleeve notes. David recorded a CD at the organ of the Sacred Heart in 2007 to raise awareness of the instrument. As the instrument has now been restored (2011), this serves as an historical record of the organ prior to that.